Background/Aims: There is not enough data for efficacy of Endoscopic ultrasound guided celiac plexus block (EUS-CPB) in Indian population where etiology and phenotype of chronic pancreatitis (CP) are different from the west. The aim was to find out the efficacy of EUS-CPB in CP irrespective of whether ERCP was done or not.

Methods: A prospectively maintained data base of patient undergoing EUS-CPB was analyzed. The outcome measures were, a) response defined as more then 50% reduction in visual analogue scale (VAS) pain score, b)VAS score at 4,12, 24 weeks after procedure and c)adverse event. Factors between responders and non-responders were analyzed.

Results: 22 patients underwent EUS-CPB between 2018 and 2021. The mean age was 40.2 years, males were 63.6%. Short duration ( < 2 years) of CP was in 36.4 % and long duration (>2 years) in 63.6 %. 18 (81.8 %) patients had response to EUS-CPB. Mean duration of response was 8 months (SD-4.73). Median VAS score at 12 weeks and 24 weeks were significantly lower among those with short duration of CP as compared to longer duration (figure 1). Males had significantly more response then females (100% vs 50%,p-0.01).Significant proportion of responder discontinued use of pain killer or used occasionally. There was no difference in response according to ERCP status. Five adverse events (hypotension 3, diarrhoea 2) all of which were minor were noted.

Conclusion: EUS-CPB is safe and effective in selected patients. It is more effective in males and when used early in course of CP irrespective of their ERCP status. 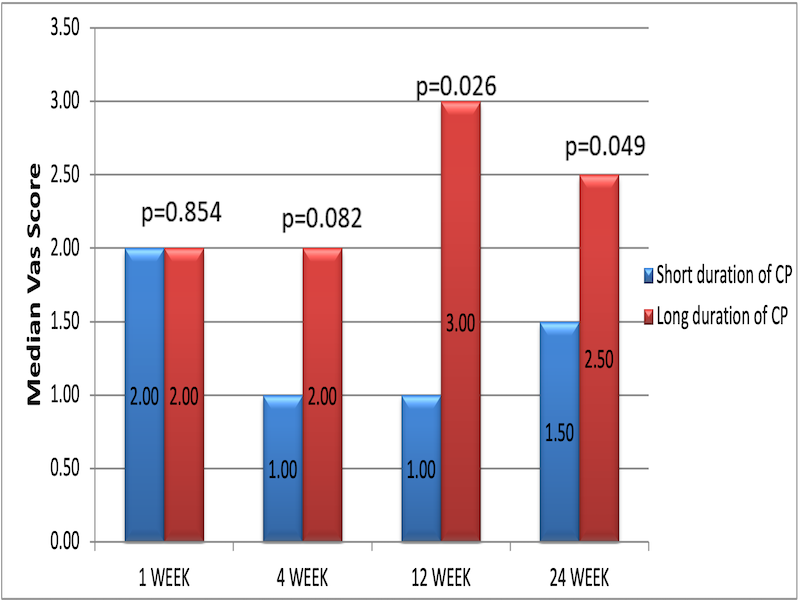