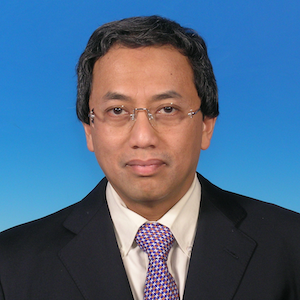 Dato’ Dr. Mazlam Bin Mohd Zawawi MB, BCh, BAO (NUI, RCSI), LRCP & SI (Ireland), MRCP (UK), FAM (Mal), FRCP (Glasg), FRCP (Lond), MD (Doc of Medicine, NUI) Consultant Physician and Gastroenterologist in KPJ Ampang Puteri Specialist Hospital (APSH), Ampang, Selangor. He received his undergraduate medical education from the Royal College of Surgeons in Ireland (RCSI) and graduated with MB BCh BAO (National University of Ireland) and LRCP & SI (Royal College of Surgeons Ireland). He completed his internship in Hospital Kuala Lumpur (HKL) and subsequently trained in Internal Medicine and Gastroenterology in the National University of Malaysia (UKM) at Hospital Kuala Lumpur. He then became a gastroenterology research fellow from 1989 to 1992 at the Royal Postgraduate Medical School (RPMS), Hammersmith Hospital, London leading to an MD (Doctorate of Medicine) degree. Dr Mazlam was admitted as a member of the Royal College of Physicians (MRCP) in London 1987. He is a Fellow of the Royal Colleges of Physicians (FRCP) of London and Glasgow. He was Professor of Medicine, Head of the Department of Medicine and Gastroenterology Unit Head, Faculty of Medicine, National University of Malaysia (Universiti Kebangsaan Malaysia (UKM)) in Cheras. He has interest in luminal gastroenterology and liver diseases. Dr Mazlam is a life member and was a past president of the Malaysian Society of Gastroenterology and Hepatology (MSGH). He is a member of the Asean Pacific Association for the Study of Liver (APASL).