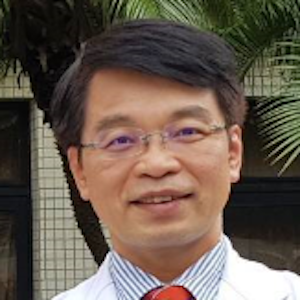 Dr Hsu received his medical degree at the Taipei Medical University in 1986. He went on to complete a residency and a fellowship in gastroenterology at the National Chung Kung University in Tainan, Taiwan. In 2000, Dr Hsu took post as a research fellow at the Baylor College of Medicine in Houston, Texas. Currently, he is the Vice-superintendent of An Nan Hospital, China Medical University in Tainan, Taiwan. In addition, he is also appointed as a Professor of Medicine of the China Medical University in Taichung, Taiwan. His research interests focus on the prevention and treatment of the peptic ulcer disease, gastric cancer and Helicobacter pylori (H pylori) infection. To date, he has authored more than 140 manuscripts, reviews and book chapters in the field of the gastroenterology and hepatology. He demonstrated that H pylori infection is the major cause of gastric cancer in Taiwan. Additionally, he and his colleagues identified dupA gene as a novel virulent marker of H pylori associated with an increased risk for duodenal ulcer. They also developed several novel regimens for the first-line therapy (hybrid therapy) and rescue treatment of H pylori infection. He confirmed that the proton pump inhibitor can effectively reduce recurrence of peptic ulcers in clopidogrel users. Dr Hsu serves as an active member of the Board of Medical Care Committee of the Gastroenterological Society of Taiwan. He has participated in many national and international research programs in gastroenterology. He serves on the reviewer boards of many prestigious scientific Journals including Gastroenterology. Dr Hsu has been invited to speak at various international and regional scientific meeting including the Digestive Disease Week of USA, UEGW and APDW. In addition, he has received many honors and awards in the academic field. He has been elected to the roster of “Top 100 Doctors in Taiwan”. In addition, he was awarded the APDW 2011 JGHF Emerging Leader Lectureship and delivered a State of Art Lecture entitled of “A New Look at Antiplatelet Agent-related Peptic Ulcer: An Update of Prevention and Treatment.