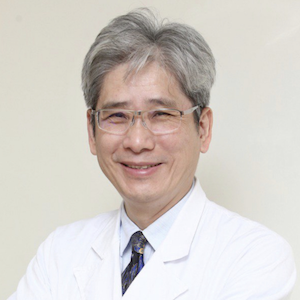 Ming-Chih Hou was born at Tainan City of Taiwan in 1961. He was graduated from Taipei Medical University in 1986. He finished his internal medicine residency and gastroenterology fellowship in Taipei Veterans General Hospital (TVGH) from 1987-1992. He is a gastroenterology attending staff since 1993. From 1995 to 1996, he was a visiting scholar at Johns Hopkins University Hospital and Georgetown University Hospital. He was also affiliated as a full professor of medicine in National Yang-Ming University since 2002 and as the director, department of Medicine of National Yang-Ming University from 2008 to 2016. He was the director, Endoscopy Center of Diagnosis & Therapy from 2010-2017, the chief, Division of Gastroenterology from 2016-2017 and the director, Department of Medicine from 2017-2021. Currently, he is the vice superintendent of Taipei VGH. He is an active participant of academic societies. He was the deputy secretary of Taiwan Association for the Study of Liver Disease, general secretary of Chinese Medical Association – Taipei and executive director of Small Intestinal Society of Taiwan. Currently, he is the director of Taipei Medical Association, the executive director of Gastroenterology Society of Taiwan and the current president of Digestive Endoscopy Society of Taiwan. He is also an international member of ASGE, fellow of ACG and AASLD. He is an expertise and active researcher in endoscopy and portal hypertension. He has published more than 300 SCI papers including in GIE, AJG, Hepatology and J Hepatology.