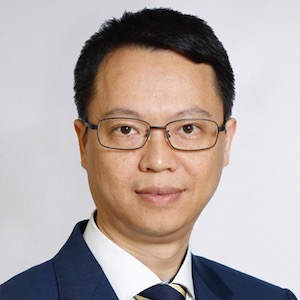 "Dr. Daniel TONG MBBS (HK), MS (HK), PhD (HK), MRCSEd, FRACS, FCSHK, FHKAM Honorary Consultant in General Surgery Hong Kong Sanatorium & Hospital Honorary Clinical Associate Professor, Department of Surgery The University of Hong Kong Specialist in General Surgery Dr. Tong graduated from The University of Hong Kong. He became a specialist in general surgery since 2006. He obtained his doctorate degrees of Master of Surgery in 2008 and Doctor of Philosophy in 2013 with the theses entitled Treatment for Advanced Staged Esophageal Cancer and Surgical Treatment for Diabetes, respectively. His main interest is in foregut surgery. Formerly, he was a consultant and core member of the Division of Esophageal and Upper Gastrointestinal Surgery, Department of Surgery, The University of Hong Kong, Queen Mary Hospital. He was enthusiastic on teaching and research as evident by numerous publications that include book chapters, peer-reviewed journals and conference abstracts. He is frequently invited to deliver lectures locally and internationally. Dr. Tong is one of the few pioneers in Hong Kong who contributed in the development of endoscopic treatment for benign and neoplastic lesions, surgical treatment for gastroesophageal functional disease, minimally invasive esophagectomy and bariatric and metabolic surgery. Recently, he also pioneered in introducing swallowed type intragastric balloon for body weight management as well as development of innovative treatment for patients with peritoneal carcinomatosis from gastric cancer. He is affiliated to twenty-three, local and international, professional bodies. There are other administrative roles such as being founding presidents of Hong Kong Obesity Society and Hong Kong Telemedicine Association as well as being council members of The Hong Kong Society of Upper Gastrointestinal Surgeons and The Hong Kong Society of Metabolic and Bariatric Surgery. Currently, Dr. Tong is the Honorary Consultant in General Surgery at Surgery Centre, Hong Kong Sanatorium & Hospital.